Regarding the Analysis phase of the ACE-V methodology, a wide variety of distortion mechanisms must be understood.  One particular example of distortion is pattern interference.  This interference results from multiple impressions of latent friction ridges superimposed, in whole or in part, on one another.  (Figure 1)  The interference pattern of these impressions can be from the combination of the same or different areas of friction skin.  It is very important to understand the various features of pattern interference. 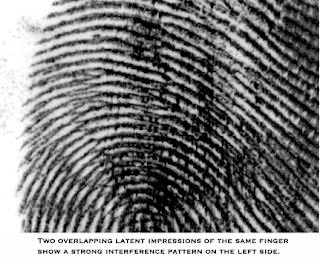 Interference features occur as the result of two or more overlying or superimposed fingerprint impressions, or as the result of slight linear and/or angular movement during the deposition of a single latent print impression.  In the latter, the flexibility of the epidermis under the influence of non-perpendicular forces at the moment of latent deposition is often the source of the non-alignment.  In many aspects, latent print impressions can be thought of as a static wave.  These interference patterns, also called moiré patterns, have several aspects that are related to the basic physics of two-source wave type interference.  The main differences are that, in general, physical frequencies, such as water waves, are repetitious generic amplitudes, whereas, each latent ridge contains unique information in its static structure.  In addition, along any particular axis within a print impression, the frequency of the ridges, or their relative spacing and direction, will vary to some degree due to the unique shape of a fingerprint.   Ultimately, we are concerned with how this information changes at the constructive and destructive like interference positions that result from non-aligned superimposed latent friction skin impressions.  What is found is that, unique ridge structure information cannot be compounded in a constructive manner.   Not only would some information be lost to the interference, some new non-relevant information would likely be gained.

The following two examples of superimposed inked print impression show both linear and angular rotational pattern features.  In the left example of Figure 2, the top print is offset to the right by about 1/2 ridge width.  The most notable interference is found in the vertical ridges.  In the right example of Figure 2, an additional counter clockwise rotation was added to show the additional associated curved patterns.  Note that with the additional angular displacement in the right print, the interference pattern left of the print’s core is not the same as the pattern found in the left print even though they both had the same right linear displacement.  As the top print was rotated the ridges in this area changed their spatial relationship.   Also, on the right most print, note the epicenter just above the core around which the rotation occurred.  In most cases, a superimposed print will not rotate so neatly around a center point.   Since the ridges above the epicenter are also semi-circular, the apparent distortion is at a minimum as the ridges were superimposed in a more precise alignment.  Ridges perpendicular to the displacement often show the greatest amount of interference as they are displaced the most relative to other areas of the impression. 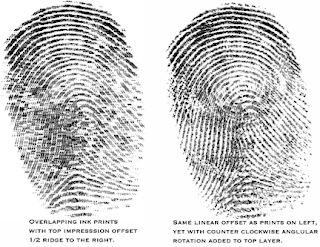 The visual features where the patterns are at a point of focus are called a node.  A linear series of nodes along an axis are described as nodal positions or locations.  This nodal axis may be straight or curved.  Specifically, nodal positions are locations within the distortion area where interference is at maximum and minimum levels.  Anti-nodal positions are where the interference is found to be at a maximum destructive level and nodal positions are locations where the visual interference is at a minimum, [1] or in some cases, an undisturbed state.  See Figure 3.  Along the nodal axis, two ridges may precisely overly each other.  As previously noted, we would expect some loss of information when regarding the unique information contained within the friction ridges in such a relative state.  As the particular physics of two-wave source pattern interference is not entirely compatible with the unique attributes of friction skin, and other unique types of pattern sources such as shoe and tire impressions.  Accordingly, we need to understand that the areas of interference can only be described accurately with the terms Nodal and Anti-Nodal.   In our comparative forensic science cases, these terms do not necessarily imply the value or quality levels of the information contained within the friction ridges but rather their apparent displacement. The offsets of the various impressions are most likely found in two dimensions, and of varying degrees.   As noted earlier, both linear and angular displacements must be considered, as well as the specific variability in the impression’s frequency or ridges spacing.  This can often be equivalent to our latent print lateral and circular slippage. [2] This variability of ridge spacing will be relevant to the specifics of the deposition itself, due again to the flexibility of the epidermis and the variance of the substrate.  Slight changes in ridge spacing due to a compression or extension, will accordingly, generate a specific interference pattern locally, and will be visualized as a variation in both the nodal and anti-nodal axis.  The direct relationship between ridge frequencies and a difference in their expected interference pattern appears to be mathematically proportional in symmetry, meaning that a slight difference in displacement will yield a slight modification in the axis of the interference pattern. 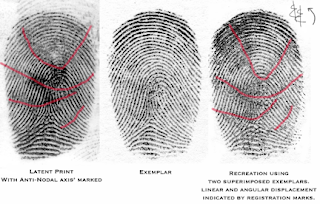 In figure 4 compare the anti-nodal axis locations on the latent print on the left, with the interference patterns on the recreation print on the right.  The recreation print was made with two exemplars.  The superimposed second impression was offset and rotated several degrees counter clockwise.  Note that the left registration mark (in the upper right corner) is the second impression.  While the recreation composite is not a precise match, it does illustrate the interference mechanism and principle and illustrates that the distortion can be understood on a scientific level.

It is important to understand that a superimposed print that is sufficiently offset in its alignment with the first impression may not accurately represent the spatial relationship of minutia of either print.  This is especially true when considering third level details.  This combination can create a new set of characteristics, or a combination of information from each impression, that may or may not be visually separable.  Also, it is noted that the “ridges furthest from the epicenter of rotation (angular displacement) … undergo a greater linear displacement than those nearer the center.” [3] See figure 2.  Thus, as related to fingerprint individualization, the nodal and anti-nodal axis’ simply represents an offset of ridges in relationship to the impression’s frequency or ridge spacing, and not necessarily a division of the quality of information into good and bad categories.  Or in other words, the most apparent visual interference at the anti-nodal locations may degrade the quality of the information just as much as the nodal positions.  In many cases the seemingly clear areas along the nodal axis, are produced by different ridges, or ridge sections overlying each other.  The examiner will have to critically analyze the impression to understand the composition of the overlay, its degree of distortion, and subsequently the value of the information available for comparison. 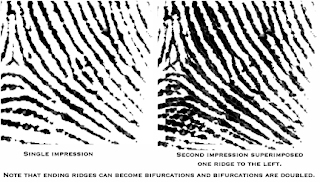 In figure 5 the superimposed second impression is registered just one ridge off down to the left.  New information is created in the process, yet the original characteristics are not entirely canceled out.  In this case, Karen Hare’s Proportional Analysis concept is beneficial in understanding the true relationships of the information. [4]
The analysis stage of the ACE-V process is a fundamental inventory of available informational components to be used in a comparison.  This information is analyzed for its quantitative and qualitative aspects, as well as its specificity and relevance.   With analysis being one of the most difficult and variable aspects of the ACE-V, it is critical to fully comprehend the specific makeup of a latent print’s distortion as this will, in turn, help the examiner to better understand the value of the information available.  Displacement pattern interference, which is represented as nodals and anti-nodals, are dependent on the periodic and non-periodic aspects of the friction skin relative to the angular and rotation aspects of the subsequent impression.  A careful analysis of the interference and the pattern it creates, will help reveal the level of distortion and subsequently the value of the friction skin impression.  For a subtle example of pattern interference in the form caused by localized slippage also reference: SWGFAST Document #10 Standards for Examining Friction Ridge Impressions and Resulting Conclusions (Latent/Tenprint) Appendix B Figure B5.

Training Exercise:
To create your own visual display of interference patterns in action, scan one loop and one plain whorl pattern in Adobe Photoshop following the simple guide below, repeating for the different pattern.  Follow the instructions below for each loop and whorl pattern.

1.  With Adobe Photoshop, Scan a grayscale print at a good resolution.
600dpi or more.
2.  Duplicate the main layer.  (right mouse click and select: duplicate copy layer)
3.  Turn off the background layer for now.
4.  Using the magic wand, with a tolerance of about 50.  Delete the background
from the new layer.  All you want is a skeleton of a print.  It may help to
drop a colored background under your working layer, such as red.  This will ensure you have delete all the background.
5.     Add a small [circle] registration mark in the corner of your main background print.
6.     Add a small [plus] registration mark on your skeletonized print layer, directly over the circle as seen on the main background layer.  (SAVE)
7.     With the colored layer off or deleted, and both [print] layers turned on, use your “move” tool and rotate the skeletonized print layer to offset the two prints relative to each other.
a.     Note how the interference patterns change relative to each prints linear and angular displacement.

This article posted to:  http://fingerprintindividualization.blogspot.com
Posted by Craig A. Coppock at 12:32 PM